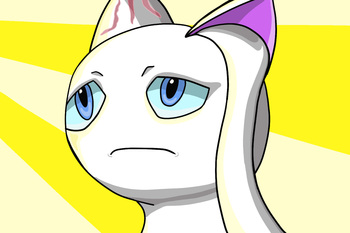 The Unlikely Ally Himself
Homura's story has been told many times, she's lived it many times, and knows what to expect. But as her story starts again, a new figure drops into it. This figure confounds her and suddenly the story that seemed so familiar to her and the others begins to change drastically. For better or worse? See for yourself.
— Story Summary
Advertisement:

One of the aspects of Puella Magi Madoka Magica that made it so bleak is that the characters were all on their own, and it becomes increasingly apparent that their sponsor for being Magical Girls actually cares very little for their well-being. Similarly, one of the things that made Saya no Uta so depressing was the humans having seemingly no chance against a powerful entity from outer space.

The Unlikely Ally is a crossover fanfiction between the two that asks: what if one of the Drones/bodies in Kyubey's Hive Mind broke away and decided to actively help the main characters? Originally, it was as straightforward as that. However, as the story goes on, things start happening that hint at a greater mystery and scope to the conflict than originally thought.

Originally published on December 29, 2018, The Unlikely Ally is a reboot of an older fanfiction (which can be found here

) by fellow fanfic author InGodzHandz, who gave permission for author Jalaras to make a reboot using the concept of their original fic.

Currently, the Fic is ongoing.

It is crossposted on three different websites, links are here:

Jalaras has also produced some fanart for the story, which can be found in the same DeviantArt Folder as the fanfic chapters. Direct Link is here: https://www.deviantart.com/lordgodsservant/gallery/69107440/The-Unlikely-Ally

This page and story contains unmarked spoilers for the Anime Puella Magi Madoka Magica! It is highly recommended that you watch the show/movies before viewing either!