Did We Just Have Tea with Cthulhu? 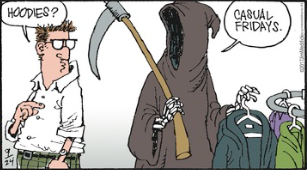 It's big. It's scary. It's horrible. It is so much more powerful than you that it could kill you without thinking, or maybe just by thinking, but instead of whatever you were dreading it has just invited you to have a nice cup of tea and a bun. For whatever reason, be it sinister and self serving or just misunderstood, the big horrible scary thingy treats you in a friendly manner.

This can lead to some troubling questions of etiquette. While traditionally one uses the fork on the far left for salad, it's frequently unclear to the mortal in this situation how this rule is modified by Alien Geometries. And what does a mind warped beyond human understanding consider tasteful dinner conversation? These problems are magnified by the fact that among Eldritch Abominations it is almost universally considered an appropriate response to breaches of etiquette to reach across the table (hypocritical as that may seem) and eat one's dining companion. To make things easier, they usually prefer two cubes of sugar, and a drop of virgin blood for creamer.

Similar to Pals with Jesus, but here we have the added weirdness that the creature seems scary. Contrast with Enemies with Death, where the menacing cosmic figure is hostile. Related to No, Mr. Bond, I Expect You to Dine and Villain Over for Dinner, but here the other party seems genuinely friendly. Often used to show the Villain is Affably Evil or an Anti-Villain. May be part of an Enemy Mine, or overlap with Don't Fear the Reaper. If things go beyond this, you may be in Did You Just Romance Cthulhu? territory. A distant relative of Go-Karting with Bowser. If you didn't know it was that bad until after you had tea, it's ... a twisted subversion of God Was My Copilot? Monster Roommate is similar, but more permanent. An Adorable Abomination is more likely to overlap with this trope.

Compare with Wowing Cthulhu where the greater being is amazed by a lesser character. A Wowing Cthulhu moment can lead into this trope and vice versa. See also Otherworldly Communication Failure in which the supernatural entity is trying to communicate a benign or helpful message to a human, but the human often runs away in terror mistaking it for malevolent.

An Eldritch Abomination is not necessarily evil. There's every chance that the creature is misunderstood and actually friendly. Even if it doesn't follow any known laws of reality, it's not a certainty that it's evil.

Sometimes happens in Lovecraft Lite. For an example of this, see Santabomination.

If this happens too often in pop culture, it can lead to The Taming of the Grue.

I do so love having visitors.

Tea? But of course!

By the way... you have such lovely eyes, could I keep them?

Oh, you say you need them?

All right, you can keep your eyes. I didn't realize you humans can't get them replaced.

Oh, and don't stare at the teacups for too long.

Alternative Title(s): Did You Just Have Tea With Cthulhu