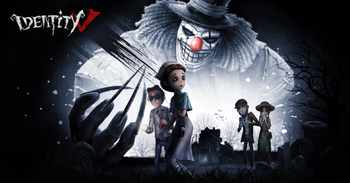 Hide & Outwit Your Predator.
Fear Always Springs From the Unknown.

Identity V is a survival-horror game in which one player is a monstrous Hunter, and the remaining players take on the role of survivors struggling to escape from them. Its mechanics are extremely similar to Dead by Daylight, with the overall aesthetic changed from Slasher Movie to a Tim Burton esque design and atmosphere.

It was put into a Framing Device by story of a detective suffering from amnesia and multiple personality disorder, being sought to find a missing person by a mysterious benefactor in a mansion and reconstructing cases of twisted games documented in the library of the mansion.