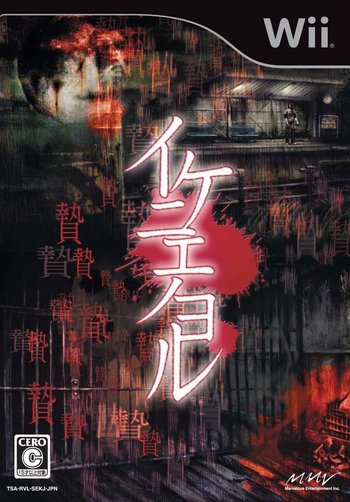 Ikenie no Yoru (Night of the Sacrifice) is a horror adventure game released for the Wii by Marvelous Entertainment, with a rather unique gimmick: You use the Wii Balance Board (optional) to control your movement, as well as your movement speed.

You switch between controlling one of the five teenage protagonists in the game; Black, Blue, Yellow, Pink and Red, all whom can be renamed, as the player sees fit. The group decides to go on a trip to the Tsukuyomi Ravine, where people used to sacrifice people to the gods, since Black's father owns the mansion that lies near it. So, why not explore the mansion near the ravine in a "test of courage"?

If you guessed correctly, things won't be going well...

This game contains these tropes: