Our Witches Are Different 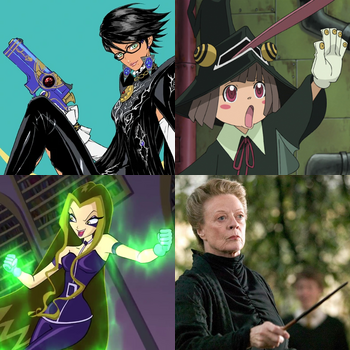 "Does she look like a witch!?"note Clockwise from top-left: Bayonetta, Angela Leon, Professor Minerva McGonagall, and Darcy
In fairy-tales, witches always wear silly black hats and black cloaks, and they ride on broomsticks. But this is not a fairy-tale. This is about REAL WITCHES.
— The Witches
Advertisement:

"Witch", like "Wizard", is a word that is sometimes used to name a specific kind of magic user, usually female. The word, witch, is, as Wicca notes, derived from the Old English, wicce, for "female magic-user". That connection to femininity sometimes makes witchcraft into a Gender-Restricted Ability. Speaking of inclinations of its appearances, given Wicked Witch and similar portrayals, witch also has a relation to being for evil female magic users, while mage or magician, with its clear connection to magic, is used for magic users in the general.

This trope, like the other Our Monsters Are Different tropes, is about how the term "witch" is used for specifically designating certain groups of beings, usually, these are humans, in the case of witches.

The Sub-Trope of Witch Classic notes how broad and widespread the concept of a witch is, since "witchcraft beliefs — the folkloric that people work malicious magic on their neighbors — are found in virtually every culture", but "Classic" means the stereotypical Western idea, for witches that have a combination of:

Which has its own sub-tropes, of Cute Witch, Hot Witch, and Wicked Witch, the last of which is about witches that are clearly presenting as evil, in obvious/stereotypical villain fashion.

Those sub-subtropes can overlap with their super-super-trope if there's something special about their definition of "witch", such that the more specific tropes don't totally describe what makes a witch. For example, if witches possess Facial Markings, along with being guaranteed young and female, then the facial markings make witches different beyond just being a Cute Witch.

Other sub-tropes of the general "witch" concept, are:

The Mage Species trope only sounds related, it's actually for species where all its members have a species-specific power. For the cases where they are also literally called witches, then it overlaps with this trope, likely playing with the femininity of this trope by making them a One-Gender Race.

Then there's Witch Doctor, for a tribe's resident shaman, healer, and wizard.

Witch Works is the index for all works that have witches as a central character.