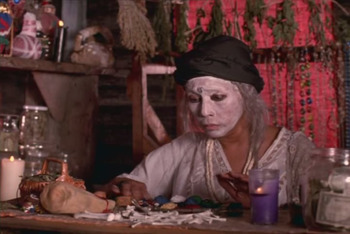 "So every old woman who lives in the forest alone is a witch?"
— Märchen von Friedhof, Märchen
Advertisement:

When a woman is mysterious and solitary, at least in terms of a husband. The town community will probably shun her, calling her a witch. In a fantasy story it might be true as she is a Wicked Witch who wanted to get rid of her husband so she cast a spell to help things get going or perhaps there is a curse on her family that makes it so they lose men. If the story is not one of fantasy, the witch impression might just be the vibe the old woman gives off as she is in mourning for her late husband.

The whole thing exists because of the Unfortunate Implications of the similarities between widows and witches. It is understandable that the neighborhood would feel that she's creepy if the woman still dresses in black and her only friends are women or she only lives with women. Although her lack of interaction with men might be because she's not actually interested or they aren't interested in her because she's as ugly as a witch. Other similarities include tending to the herb garden that reminds her of all that is living and healthful, having a cat because it's easy to take care of and will keep her company, being very old and unwell, being bitter towards people as the widow is old and lonely and laughing wickedly because she's out of touch with reality.

There's also speculation that some widows (such as Sarah Osborne in Salem) were accused of witchcraft by relatives of their husbands who believed themselves more deserving of their inheritance.