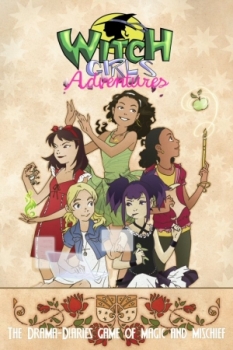 Magic is real... It is in the wind and rain. It is in stone and fire. And occasionally, in the souls of people. Lilith was the first. But women blessed by magic have since the dawn of time been a source of fear. However, despite that fear, some have sought her power for insight, knowledge, and healing. [...] Once a protector and mother of civilization, she was soon hunted by the untrusting, the ignorant, and the arrogant. And though she may think she's alone, there were always others. And together they showed the Mundanes they never were the masters of their world. They learned eventually that power comes in all shapes and sizes. So be nice. Or be a toad.
Advertisement:

Witch Girls Adventures is a tabletop role-playing game published in 2009 by Channel M. While it functions as a stand alone universe, its setting and NPCs both use characters and elements from Channel M's Witch Girls Tales comic book series and Abby Soto's Princess Lucinda comic book series. The game runs on Channel M's own "Drama Diaries" system.

In the game, you play a student at one of the many magic schools set up for witches around the world and go through the usual trials and tribulations that being a tween to teenage girl brings, all while trying to learn how to use your powers. Obviously, the game is designed to get young girls interested in pen-and-paper RPGs.

It is based on an earlier comic book series from 2003-2006 which involved 2 published volumes called Witch Girls and Witch Girls Tales (later referred to as "volume 1"). They starred a separate group of girls who attended a school called Coventry. These volumes were later compiled into an anthology called "OWG! Original Witch Girls!"

The new girls in the RPG attend a different school called Willow-Mistt, and are featured in a comic in the main book. They are also featured in comics in the supplements Star Creation Guide and Pirates of Buccaneer Hill. Other supplements (like all About the Voodollars and 13 Magazine) did not include comics. A comic anthology, also titled Witch Girls Tales (referred to as "volume 2" to distinguish it from the original Coventry publication) was also produced featuring them, as well as issues 0, 1 and 2 of a "Princess Lucinda" spinoff series.