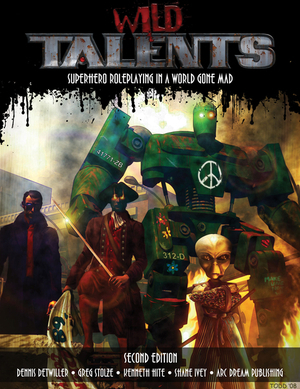 Wild Talents is a roleplaying game from Arc Dream Publishing. A sequel to Godlike in both mechanics and setting, it's massively expanded from the original into a hugely adaptable superhero game specializing in bizarre superheroes and other super-empowered beings.

The heart of the game mechanics is the One Roll Engine, which is based around resolving actions in a single roll. One attack roll, for instance, will tell you if you hit, where you hit, and how hard and fast you hit. There is a great deal of emphasis on flexibility and customization. There are loads of optional rules for streamlining the rules, adding complexity, or lowering or raising the lethality of combat—the latter in particular, as the basic game is extremely lethal. Wear a helmet.

The most impressive feature is the extensive and wide-open superpower creation rules, allowing for complex or unusual supernatural abilities expressed in a simple fashion. You first buy your Archetype, which is composed of a Source and Permission. Sources are where you get your powers from, Permissions are what you can do. You can pick multiple sources if you wish (for instance, a mutant who's also bolted into a suit of power armor would have the Genetic and Science sources), and if you want a grab bag of random powers, you can always pick the Super permission (to make someone like the Silver-age Superman). After that, you can buy Hyperstats (for super-strength, super-intelligence, etc.), Hyperskills (for super-martial-arts, super-hacking, etc.), and/or Miracles, which cover the flatly impossible (eye lasers, subdermal armor, projecting your soul out of your body, being a Martian, etc.)

Miracles are built on three qualities—Attacks, Defends, and Useful. Each represents one way a power can be used. For example, Spider-Man's webs can be used to attack (shooting web balls), defend (pull him out of the way of attacks), and be useful (swing from building to building, tie up foes, and be used for web-like stuff). In Wild Talents terms, you'd buy ADUUU—one Useful for swinging, one Useful for tying, and a Useful with Variable Effect to represent Everything Else. Add Extras, Flaws, and you get the cost per die. Voila! Your own superpower!

The heart of the game's settings, however, is the open defiance of Reed Richards Is Useless; its main theme is "If you can change the world, how does the world change?" With two exceptions (This Favored Land, intended to be The Civil War WITH SECRET SUPERHEROES!, and eCollapse, a dark Transmetropolitan-esque satire), every setting is dramatically altered by the presence of "talents," the game's term for Differently Powered Individual types. While Godlike's talents made the world a weirder place, the end results of World War II are recognizable. Contrariwise, after WWII, history goes Off the Rails with dramatic ferocity, creating an elaborate hi-tech Alternate History full of heroes, villains, the uncanny, and the all-too-human, described in loving and elaborate detail. Other settings, such as Grim War, This Favored Land, The Kerberos Club, Progenitor, and eCollapse all take the concept of superheroics in a different and fascinating direction. Kenneth Hite's essay "Changing the Course of Mighty Rivers" explains how you can make your own.

Definitely worth a look. The base rules are only 10 bucks (5 for a .pdf) if you don't want to get the giant hardback version, and versions of The Kerberos Club for Savage Worlds and FATE are available.

The core game contains examples of: