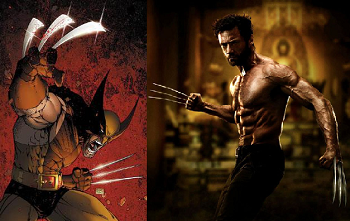 "Eh, looks about right."
"Yeah, like Batman and Robin. Only... I ain't wearing no tights. You can wear tights, but I'm not wearing tights."
— D.L., Heroes
Advertisement:

These superheroes just aren't called superheroes. They often don't wear costumes or use code names, but they have abilities far beyond those of normal men, and are superheroes in all but name.

Occasionally, such stories will lampshade the trope by having characters in off hand discussions about whether they'd look good in a cape, or using Something Person-style nicknames, but discarding the ideas as being "silly." A "This Is Reality" remark can be thrown in, as well.

Like many tropes this one has underlying practical considerations, such as:

Compare with Sci-Fi Ghetto, Not Using the "Z" Word, Animation Age Ghetto. See also Civvie Spandex and Spandex, Latex, or Leather. Series in which people are Not Wearing Tights typically use a Differently Powered Individual label.