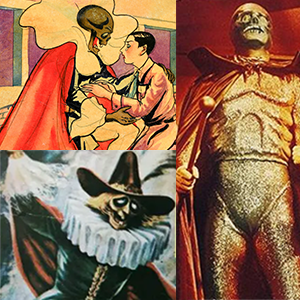 From top left, counter-clockwise: Image from the earliest surviving

Ōgon Bat (黄金バット, lit. "Golden Bat") is one of Japan's earliest superheroes, which debutted in 1930 in a kamishibai

("Paper Theater") story starring a Phantom Thief villain named Kuro Bat — in the last chapter, a mysterious Good Counterpart of him called Ōgon Bat, a musketeer-like hero with a golden skeleton visage and prone to ominous laughs, saves the day. Shortly afterwards, thanks to the brand new character's enormous popularity, Ōgon Bat became the hero of his own stories, while Kuro Bat was all but forgotten and was reimagined as his Arch-Enemy, the Diabolical Mastermind known as Nazō.

However, as a popular yet non-copyrighted character, Ōgon Bat was legally in the public domain, which meant that every creator was free to reimagine him, many times with similarities In Name Only. Nonetheless, after WWII, some of his original creators kept making new stories: from 1947 to 1956, Takeo Nagamatsunote Commonly acknowledged as the character's true creator, the first Ōgon Bat artist, made a series of best-selling illustrated books that served as The Remake of the original stories with some elements of the other unlicensed adaptations (which codified Ōgon Bat's mysterious origins, flight powers and cane weapon), and probably served as the main source of the now-lost 1950 film. Likewise, the original writer-performer Ichiro Suzuki and the iconic kamishibai artist Kōji Kata kept doing stories in their classic theatrical format... Although most of the innumerable kamishibai stories, as well as their unlicensed copies, have been lost.

In 1966 Toei released a new Ōgon Bat movie starring Sonny Chiba, which reimagined the titular character as an ancient Atlantean with new superpowers like Super Strength and Super Speed, X-Ray Vision, and even a Bat Signal — and a new a golden-clad pro wrestler/superhero design that would become his Iconic Outfit, thanks to Toei's cross-media campaign which included an Anime, various Manga adaptations, and other media. That said, the character's original incarnation was still fondly remembered, as seen in the lost 1972 Biopic Ōgon Bat ga Yattekuru, pre-war themed plays and musicals, and even a Osamu Tezuka-penned kamishibai throwback.

Due to his popularity in Japan, Ōgon Bat was essentially the Trope Maker for Japanese superheroes. His legacy can be seen in the superheroes who have permeated Japanese media since then, including other early 1930s kamishibai superheroes like Prince of Gamma

, the Henshin Heroes of Tokusatsu films and shows, Manga and Anime superheroes such as Astro Boy and Gatchaman to Magical Girls like Cutey Honey, Sailor Moon and Pretty Cure, and even Super Robots (as he regularly fought gigantic robots). In November 2022, a new manga illustrated by Kazutoshi Yamane (Gamble Fish) was announced in the magazine Champion Red by Akita Shoten.

Compare Skull Man and GARO, the latter of which was originally planned as a Toku adaptation of Ōgon Bat. Also compare with Hakaba Kitarō, the only other long-standing kamishibai franchise (best known as GeGeGe no Kitarō).