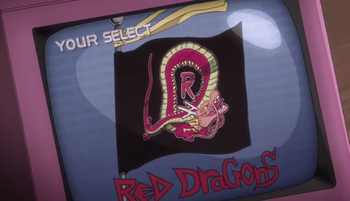 REHD DRAEGUNS!
"Fox Publications was the poverty row of comic books, their superheroes all completely and utterly derivative. I once asked the creator of the Blue Beetle, their most important character, what on earth inspired him to create this character named after a bug? He told me in two words: Green Hornet. (laughs) Well, there you go!"
— Jim Steranko, Superheroes: A Never-Ending Battle
Advertisement:

Codenames are cool. From superheroes to soldiers, spies to secret agents, many people agree that having a codename is an easy way to up your coolness factor... as long as it's not actually an Atrocious Alias, of course. Two particularly common ways of having a codename for your character is by using either a color or an animal. But who's to say you can't combine both?

Most Writers Are Human, and as has been noted before, most humans are very reliant on their sense of vision, making it easy to see (pun not intended) why many writers would opt to give their characters a color-based codename. Animals, meanwhile, can obviously be found everywhere on Earth, and the history of humanity's relationship (whether positive or negative) with animals go back millennia, in both real life and mythologies from all over the world. It's no surprise then to find important characters choosing a name (or being given one) based on a particular animal that might fit their personal motifs. It also helps that both the concept of colors and animals each come with their own cultural associations and stereotypes, thus increasing the appeal to writers who wish to include some form of symbolism in a character's codename.

This also applies to groups of characters or even organizations, many of which may purposefully choose a specific color-and-animal combination to evoke certain ideas and imagery. It also applies to objects of great importance, especially if they come with their own symbolic values. Expect to see a lot of the usual animals popular for their badassery like the Noble Bird of Prey, Panthera Awesome, or Noble Wolf. In Speculative Fiction, more fantastical animals (such as dragons) might be used instead.

Note that this does not cover cases where the color-and-animal combination describes the character, as opposed to being a name for that character. For example, the 'red dog' in Clifford the Big Red Dog doesn't count because Clifford is a (big) red dog; here the color-and-animal combination is a descriptor of who, or rather what, Clifford is. On the other hand, the character Akainu (aka inu literally translating to "red dog") from One Piece counts because it is used as that character's codename. In a similar vein, this trope does not cover cases where an animal character is called by their literal coloration and species; that falls under A Dog Named "Dog". To illustrate: the pink panther called The Pink Panther does not count, but the diamond called Pink Panther does as it is intended to be a catchy and evocative name for a plot-relevant object.

See also Color Character, which is specifically about masked characters adopting a color-based alternative name. Like that trope, this trope may or may not be Colour-Coded for Your Convenience. Sister trope to Adjective Animal Alehouse, as the practice of naming bars, inns, and taverns often (but not always) employs this particular naming scheme. A subtrope of both Colourful Theme Naming and Animal Theme Naming.