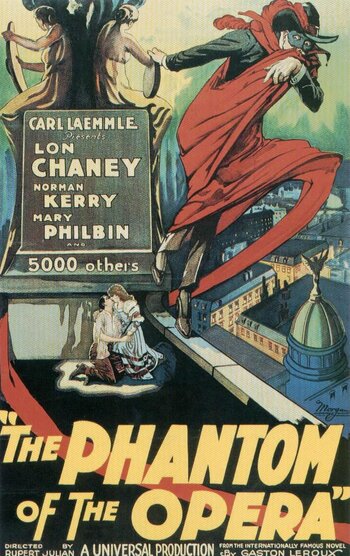 "You are in no peril as long as you do not touch my mask."
— The Phantom
Advertisement:

The Phantom of the Opera is a 1925 film directed by Rupert Julian, starring Lon Chaney as the Phantom.

The Paris Opera House has come under new ownership. After the papers are signed, the old owners mention in a faux-casual aside that the new owners may hear of a ghost. In fact, the legend of the Phantom of the Opera is well known. A mysterious figure in cloak and hat is sometimes seen in Box Five. Joseph Bouquet, a stagehand, tells the terrified chorus girls of a "living skeleton" who lurks in the theater's depths.

Meanwhile, a nobleman named Raoul comes to see his old girlfriend, Christine, the understudy to prima donna Carlotta. Raoul wants Christine to leave the theater world and marry him, but she's reluctant. Part of the reason she's reluctant is the mysterious voice, coming from behind the walls, telling her that she will be the greatest opera singer ever. Soon after the new owners of the theater get a letter from the Phantom himself, saying that if they don't let Christine sing in the next production instead of Carlotta, they'll regret it...

This is the second film adaptation of Gaston Leroux's novel The Phantom of the Opera and the oldest to survive, a previous German version having since been lost. It is seen as one of the most faithful adaptations to the original book. It depicts the Phantom as tragic, but also murderous and criminally insane, and deformed from birth. It's also the most famous role of Lon Chaney's career.

It is grouped in the franchise of Universal Monster films along with its 1943 remake.