Film / The Power of the Press 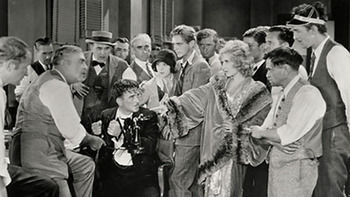 The Power of the Press is a 1928 film directed by Frank Capra, starring Douglas Fairbanks Jr., Jobyna Ralston, and Mildred Harris.

Clem Rogers (Fairbanks) is a cub reporter at a big-city newspaper. He is green as green can be, writing up weather reports, badgering his editor for real assignments that are not forthcoming. He gets a huge break when the district attorney is murdered on an evening where Clem is the only reporter in the newsroom. Clem makes his way to the crime scene only to spot an attractive woman climbing out of the building. A helpful passerby named Van tells Clem that the woman is Jane Atwill (Ralston), daughter of one of the candidates in a mayoral election that is only two days away. What Clem doesn't know is that Van is a Mook in the employ of Blake, the other candidate for mayor. Blake is a crook and has lots of secrets, including Marie Weston (Harris), his moll, who knows way too much.

The Power of the Press was a step up for Capra, who had started out making comedies with Harry Langdon and would soon go on to bigger and better things. Douglas Fairbanks Jr. was only 18 years old and enjoying one of his first leading roles; he would soon follow in his father's footsteps and become a huge star. Ralston and Harris were both known for their association with silent screen comedians. Harris was Charlie Chaplin's first wife; she'd had a decent acting career that came to a halt with talkies. Ralston is best remembered as Harold Lloyd's leading lady for most of his best films. She left Lloyd's company and made a stab at a career of her own, appearing in this film as well as Wings, but her career also ground to a quick halt with the arrival of talking films.