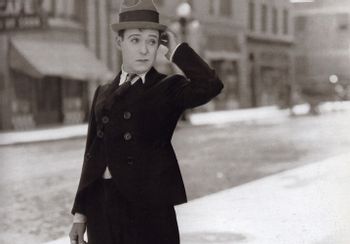 The Strong Man is a 1926 comedy film starring Harry Langdon, directed by Frank Capra. Langdon is Paul Bergot, a Belgian soldier in The Great War, who is engaged in a pen pal correspondence with an American girl named Mary Brown. Paul is captured by a German soldier, Zandow. After the war, Zandow has started up a strong man vaudeville act, with Paul as his assistant. They take the act to America, where Paul sets out in search of Mary Brown.

The Strong Man helped make Langdon a star who briefly rivaled Charlie Chaplin, Buster Keaton, and Harold Lloyd in the pantheon of silent screen comedy. It was also Capra's directorial feature film debut. Langdon and Capra would go on to make another hit feature, Long Pants, but Langdon then fired Capra and started to direct his own films. This led to the swift end of Langdon's A-list stardom, although he continued working in B-Movie comedy films for years. Capra's career went in the opposite direction: he became one of the most successful directors of the studio era.