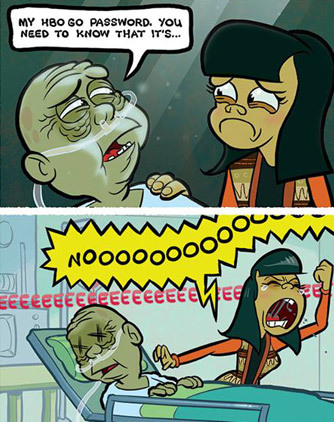 "See? It happens every time! Just as they're about to tell you who the murderer is...
they get killed!"
— MAD, "Kane Keen, Private Eye"
Advertisement:

The informer, about to give The Hero a key piece of information, is killed before he can tell who th-

Frequently, the scene is stretched out by the informer being excessively verbose before being killed without getting to the important information. Sometimes this is because they insist on some reward from The Hero (such as protection from whomever they're informing on) or they're being a jerkass. When he's dying and goes on at length about how he doesn't have the strength left to provide the necessary information this trope is being Played for Laughs.

In many cases where the informant is killed by an unknown assassin, the hero is just as easy a target, prompting viewers to wonder why the assassin doesn't just kill the hero instead and end the story right there. A well-made story will arrange the scene so that the hero isn't a viable target (behind an obstacle, on the other end of a phone call, etc.), and in rare cases, the Big Bad has a reason to let the hero live... for now.

Compare the Almost Dead Guy, who gets hurt and then gives the information. Sister Trope of Conveniently Interrupted Document. Subtrope of Lost in Transmission. See also Dying Clue. Absolutely no relation to My Nayme Is, nor a certain professional wrestler.

King Harold is about to say the name of the other heir to the throne before he dies. He finally said the name "Arthur" before he gives his last croak.

King Harold is about to say the name of the other heir to the throne before he dies. He finally said the name "Arthur" before he gives his last croak.