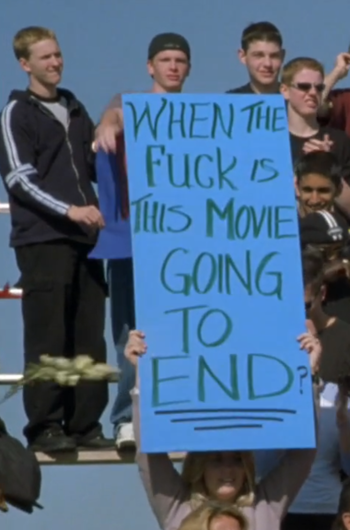 A rare case of self-awareness.
"Then comes the ending of the movie. Or the endings. One after another. Farewells. Poignancy. Lessons to be learned. Speeches to be made. Lost marbles to be rediscovered. Tears to be shed."
— Roger Ebert, on Hook
Advertisement:

When a viewer, reader, or player finds the fiction they are perusing to be otherwise fine, but have a problem with the fiction when it can't... quite... finish... itself.

The reasons vary: maybe it has pacing issues after the first half or the first main villain in the Sorting Algorithm of Evil is defeated, or it's become deathly dull post-climax, or the effort needed to beat the Final Boss just doesn't seem worth it, or the Final Battle goes on for too long, or perhaps the author just didn't know how to end it, couldn't decide on an ending and just threw all of them in.

Note that this isn't simply "the story is too long/goes too slowly," but it actually appears if it's going to end yet doesn't, several times. The effect of this, usually, is a frustrating and jarring experience which eventually has the viewer thinking something along the lines of "Just end already!" This is, for the most part, not a reaction you want to provoke in the reader, or the theatergoer who badly wants to run to the restroom but doesn't want to miss the end of the movie that they paid good money to see.

Boring Return Journey is usually a deliberate attempt to defy this phenomenon. For a variant exclusive to video games in terms of gameplay, see Disappointing Last Level (though if the story falls under this, it still counts here). For series that Executive Meddling forces to keep going, see Franchise Zombie. Some songs that employ Epic Rocking can lead to this, say, if the end is two minutes of instrumentals.

Arc Fatigue is a small-scale version, where a single story-arc goes on longer than it should. Compare Epic Instrumental Opener, where the intro of a song seems neverending, and Leave the Camera Running. Your Princess Is in Another Castle! is when the reader/player thinks the protagonist has reached the ending, only to find out it's a ruse.

The Chris Carter Effect is when this or Arc Fatigue causes the audience to grow impatient and give up on the series (and it usually is a series of some kind).

Contrast Awesomeness Withdrawal where you find yourself wishing the story would go on, and It's Short, So It Sucks! which is basically the reverse criticism of this. Also contrast Prolonged Prologue, where the opening of the story is what's making everything seem like it's dragging.

For films/plays in theaters, these can really be rough for someone fighting Bladder of Steel, as there is no way to pause the production.