Comic Book / The Trial of the Flash 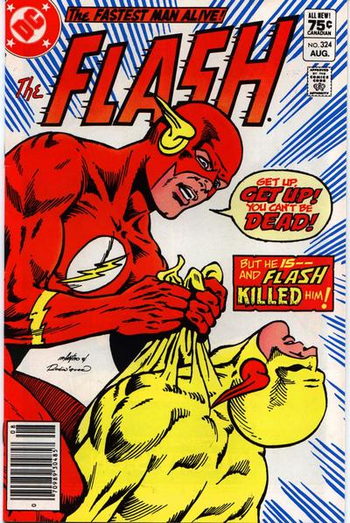 In a split-second, the trial began.

The Trial of the Flash was an extended storyline in The Flash comics, written by Cary Bates and Carmine Infantino. Lasting from issue #323 to the end of the series in issue #350, it's notable for being very long, as well as ending the Barry Allen run of the Flash as a lead-in to Crisis on Infinite Earths.

The story had its genesis in Flash (vol. 1) #275, when Barry's evil counterpart, the Reverse-Flash, killed his wife Iris. By the time of #323, Barry had found happiness with Fiona Webb and intended to marry her. Unfortunately, Reverse-Flash wanted to kill Fiona too, and in the resulting struggle, the Flash snapped his enemy's neck, killing him.

This resulted in the titular trial, where the Flash was charged with manslaughter and eventually murder, was almost voted out of the Justice League, and had to reconcile his Barry Allen identity with what the Flash was going through—not helped by his Rogues Gallery still making frequent attacks. In the end, things wrapped up happily for the Flash, but it was short-lived as he died soon after in the Crisis.