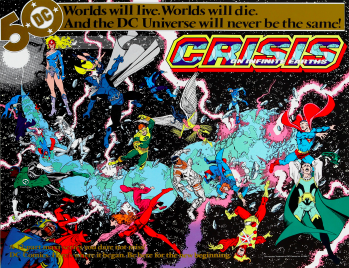 An event so vast that it can barely be contained in this space!
"Worlds will live. Worlds will die. And nothing will ever be the same."
Advertisement:

Crisis on Infinite Earths is an ambitious 12-issue mini-series by DC Comics, lasting from April 1985 to March 1986. Essentially, The Crisis Crossover.

As a child, little Marvin Wolfman wanted to do a big series where every hero in DC Comics, ever, would team up to fight a cosmic villain called "The Librarian". Then Marvin grew up and became Marv Wolfman, the man who managed to make the Teen Titans successful.

Crisis is notable for being one of the first comic "events" (Contest of Champions (1982) actually came first, as well as Secret Wars (1984), which was more of a merchandising promotion like DC's Super Powers), but also for promising "Everything you know will change! The DC Universe will never be the same!" and actually delivering. Unfortunately, for every continuity problem it fixed, three more sprang up in its place, leading The DCU to become even more convoluted and cluttered than it was before as writers scrambled to fill in the gaps left by characters and universes that no longer ever existed. Indeed, the changes wrought throughout the DC Universe by Crisis were so profound that, according to some, its publication marked the end of The Bronze Age of Comic Books.

Because of the holes in continuity it left behind, Crisis on Infinite Earths has spawned several Crisis Crossover sequels that have attempted, with varying success, to make sense of the mess. These include 1994's Zero Hour: Crisis in Time!, 2006's Infinite Crisis, 2007's 52, 2008's Final Crisis, and 2009's Blackest Night. Legends can be seen as an epilogue, as it allowed the new DCU to introduce themselves to each other; for example, it was the introduction of a young adult Wonder Woman to the other DC heroes. Much of the Geoff Johns era as head creative mind for Green Lantern also ties in directly with Crisis (specifically the Anti-Monitor). The in-universe ramifications of the Crisis were also a recurring theme of the late-'80s Mind Screw series Animal Man. Much of its imagery and backstory was referenced in JLA/Avengers.

Compare Secret Wars (2015), another high stakes multiverse-spanning crossover that has dramatic consequences for a superhero universe.

Tropes codified or invented by this crossover include:

open/close all folders
A - H
I - N
O - Z
And the universe was never the same.