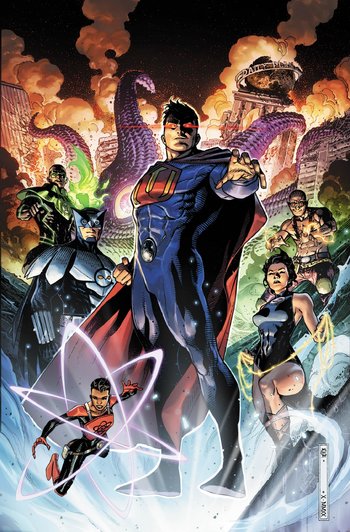 Crime Syndicate is a miniseries is written by Andy Schmidt, with interior art by Kieran McKeown beginning in March of 2021. It centers around the titular villains after yet another Continuity Reboot following Dark Nights: Death Metal. This book is part of the DC Infinite Frontier line.

A paranoid titan (Ultraman), a narcissist (Super Woman), a nihilist (Owlman), a broken moral compass (Power Ring/Emerald Knight), a sociopath (Johnny Quick) and a sadist (Atomica). Does the world stand a chance? Spinning out of the pages of Dark Nights: Death Metal, the DC Multiverse is reborn, and with it a new Earth-3! Witness the true origins of the malevolent makers of mayhem known as the Crime Syndicate as a common foe unites them! But how long can alliances last between villains like these?

The Miniseries contains examples of: