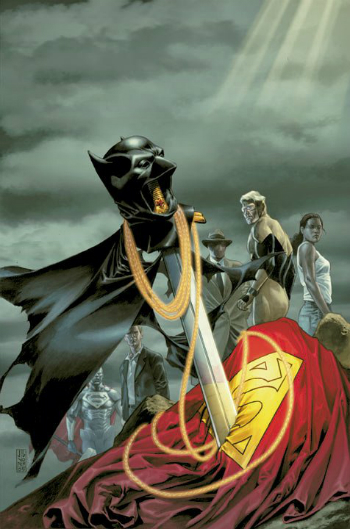 It was a year without DC's greatest heroes. There would be others to take their place.
52 was a yearlong series published by DC Comics from May 2006 to May 2007. As the name suggests it consisted of an issue every week for an entire year, a Herculean task made easier by having four writers (Geoff Johns, Grant Morrison, Greg Rucka, and Mark Waid), one breakdown artist (Keith Giffen), and a veritable army of pencilers, inkers, colorists, and letterers. The story takes place between the events of Infinite Crisis and the One Year Later storylines of Wonder Woman, Superman, and Batman.
Advertisement:

While Superman, Batman and Wonder Woman appear occasionally throughout the story, the main focus is on the rest of the DC Universe as it functions without its iconic heroes, devoting most of its panel time to second and third string characters, including some who had been all but abandoned at the end of The Silver Age of Comic Books. Because of the sheer number of characters to keep track of and all the continuity and decades old story lines used as the backbone of the story, 52 could be accused of veering into Continuity Porn. This is alleviated to a certain degree by the collected volumes of the series, which included creators' notes at the end of each week that tended to illuminate various parts of that week's chapter (including some of the more obscure references). DC also produced a companion book to the series that reprinted some classic issues featuring some of the major characters of the series that are not as well known (Rip Hunter, for example, had been pretty much been out of DC Comics since the 1960s, but becomes pretty important as 52 presses on), as well as more recent issues that set-up the characters for their individual stories.

While plot lines and various characters flow in and out of each other as the year goes on, there are seven main plot threads that the entire series can be boiled down to for simplicity's sake (minor spoilers ahead):

The major consequences of the series on The DCU as a whole is proving that the DC Multiverse still exists as well as setting up some of the future storylines of some of its major characters. It also set the standard for weekly yearlong series published by DC, which has yet to be equaled by any of the other series that have followed.