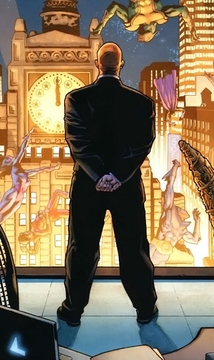 He's not looking at you, but he sees you all.
"My Lord! I am here to interrupt your 'staring imperiously out of the window' time to inform you that you have a call from a Lieutenant Colonel Leander!"
—Lorlara, Grrl Power
Advertisement:

He's the Big Boss, the Evil Overlord, or some other higher-up either good or bad. When he receives people in his office, instead of looking at them directly, he talks with his back to them while looking out the window, probably with his arms folded behind him.

Usually intended to convey that the character is so badass he can't be bothered to look at his audience, this is sometimes used to indicate an internal conflict of some sort (depending on his facial expression). Also has the bonus of keeping his identity a secret, up until the Chair Reveal or Shadow Reveal.

If the other character is a trusted lieutenant or confidant, the senior figure may ask them to look out the window and "Tell me what you see" in order to segue into making a point.

As a specific Sub-Trope of "Back to Camera" Pose used to make authority figures look powerful, this may be part of The Faceless. Compare Drama Panes.