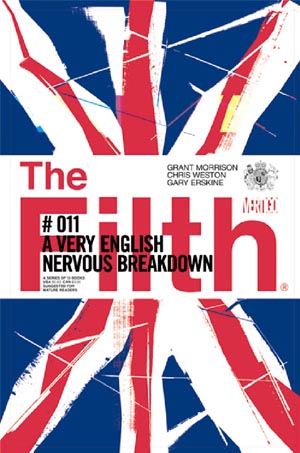 The cover of issue 11
"There's a reason they call us The Filth."
Advertisement:

Grant Morrison's thematic follow-up to The Invisibles, The Filth is a very darkly humourous maxiseries about Greg Feely, a hapless loner who lives alone with his ailing cat and subsists on a diet of chocolate and pornography, who one day discovers that he is really Ned Slade, a gun-toting interdimensional agent. The story is told in 13 issues (August, 2002 - October, 2003).

It seems that Ned works for The Hand, AKA The Filth, a super-secret agency tasked with eliminating anything that might upset the natural balance of the world. Greg Feely is just a holiday persona used by agents who need to take time out in a fictional life to recuperate. Unfortunately, Spartacus Hughes, a body-jumping agent for The Hand, has gone rogue and Ned has been called out of his holiday to go sort things out.

Or it's all a lie and Greg's finally gone crazy.

Meanwhile, a group of micro-organisms created to "hug the cancer away" take over a technologically modified woman named Sharon Jones as their bio-vessel, and eventually take up residence in what may or may not be a puddle on Greg's kitchen floor, containing what may or may not be the ink supply for the whole comicverse. And then there's a Golden Age comic book hero named Secret Original, who escaped from his pages and was left permanently crippled in the attempt. And there's a little flower shop near Greg's house. And a communist chimp. And kids, kids with ant heads.

The book is a snapshot of Britain in the early 2000s (paedophile-hunting mobs, security cameras on every street corner, etc.) mixed with a mad otherworld that looks like a cross between Philip K. Dick's nightmares and a rubber fetish playground.

Morrison, who believes that their comics are also spells that can magically transform the consciousness of their readers, intended it to be an 'inoculation' against the horrors of modern living as well as a celebration of the nature of filth: something which is an inescapable part of living, but which humanity tends to ignore, bury or flush away.

The series also revisits the concept from The Invisibles of all humans being cells in a single immense organism and puts a more literal spin on it. For example, Ned Slade is effectively an antibody and The Hand itself is an immune system for reality. Thus, the 'bad guys' represent different illnesses (body-jumping Spartacus Hughes is a virus, Anders Klimakks is an STD, etc.) that must be destroyed in order for the body to thrive. And just as the body builds up a resistance to infections by copying their traits, so The Hand reprograms rogue elements into becoming agents themselves.

This also leads to a return to one of Morrison's long-standing obsessions: the repetition of patterns from one 'layer' to the next. For example, Slade is a living thinking being, but is merely an operative that exists to maintain the being that is reality. This is then replicated in the tiny nano-people that end up living inside Slade, who may themselves create smaller versions to go inside themselves, and so on and so on forever.

And there's a sweary communist chimp in it and everything.