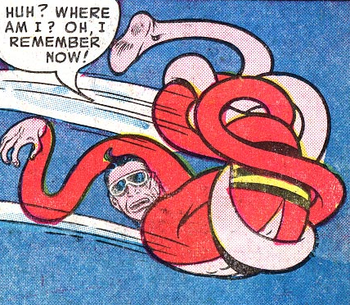 His hands are tied. Along with everything else.
"As I foretold, you have annoyed me." Moments later, my arms and legs were tied up in knots. Square knots, to boot. I hate square knots—they're not natural to the human anatomy.
— (Eric Flint, The Philosophical Strangler)
Advertisement:

Victims getting abused by tying their limbs and other body parts into knots usually demonstrates the strength of their abuser. A popular tactic in art styles that use Rubber Hose Limbs, it can be used in other mediums as well. In Real Life, the bones usually prevent the limbs from bending the way they would need to for this trope.

Knotty Tentacles is a subtrope, covering examples of prehensile tentacles, snakes, and characters with stretching superpowers. Both tropes are subtrope of Bound and Gagged, which covers all examples of characters getting tied up (albeit usually in a less literal fashion).

Compare with Barehanded Bar Bending, where the strong character does this same thing to a nonliving object, usually something made of metal. This trope, in contrast, is usually Played for Laughs as a subset of Amusing Injuries.

May be used as a part of Curb-Stomp Battle.

Not to be confused with Knotty Tentacles.