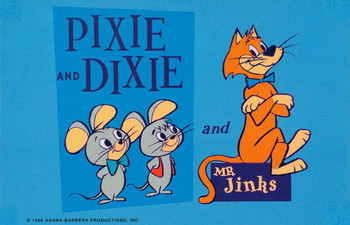 Pixie, Dixie and Mr. Jinks was an animated series of shorts by Hanna-Barbera. These shorts occupied the middle slot on The Huckleberry Hound Show.

In these shorts, Pixie and Dixie are two mice who have to deal with a Beatnik cat — Mr. Jinks — who lives in the house as well. And boy, does he hate those "meeces to pieces".

Daws Butler voiced Dixie and Mr. Jinks (the latter in a manner reminiscent of Marlon Brando), while the vocal actor for Pixie was Don Messick.