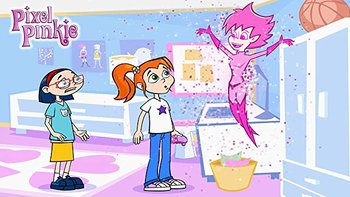 Pixel Pinkie is an Australian animated television series produced and created by Blue Rocket Productions in association with the Nine Network and principally funded by The Film Finance Corporation Australia. It started airing on 29 August 2009.

Not to be confused with Pinkie Pie of My Little Pony fame, despite her also having a perky personality and getting into magic-involved hi-jinks.