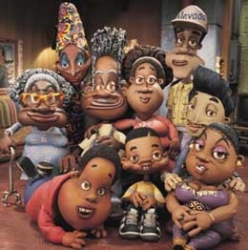 Thurgood Stubbs and other tenants of the projects.
"Once upon a time, in the projects..."
— Narrator in the opening sequence
Advertisement:

The PJs (Short for "The Projects") is a Stop Motion television sitcom created by Eddie Murphy, Larry Wilmore, and Steve Tompkins, and produced for Imagine Television and Touchstone Television. The show centers around Thurgood Stubbs (voiced by Murphy in the first two seasons, Phil Morris in the third season), the superintendent of a housing project in a fictional city modeled after Chicago. It is best remembered for its unique use of claymationnote Courtesy of Will Vinton Studios, for which this was their Swan Song prior to their reformation as Laika. when most animated primetime shows still relied on hand-drawn animation.

It lasted for two seasons on FOX, after which the show was canceled. Then, The WB swooped in and gave the show one more season before it was canceled for good due to high production costs.

The third season of The PJs had a number of major changes in production, with the most notable being the recasting of Thurgood Stubbs due to Murphy leaving the series over contractual disputes, as well being involved in other projects at the time. Other notable changes include smaller production budget, outsourcing from Will Vinton Studios to Charged Productions, and Disney having no involvement in the third season, as they were uninterested in making a third season. As a consequence, the season was co-produced by The WB's production arm Warner Bros. Television in Disney's place (Warner Bros. eventually agreed to give the rights to the third season to Disney in order to settle ownership claims).

Not to be confused with characters wearing PJs.