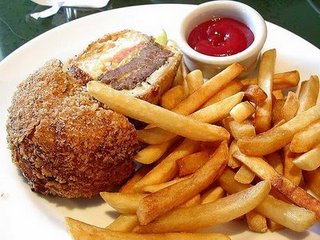 Pffft. They didn't even deep-fry the ketchup.note For those who can't quite make it out, yes, that is indeed a deep fried double cheese burger.
"There's something just so naughty about frying. The rebellious American spirit. You say I can't have fried food? I'm gonna fry everything. I'm gonna fry that iconic sandwich cookie. I'm gonna fry an air conditioner."
— Ted Allen, Chopped
Advertisement:

In the practice of deep-frying, your item of choice is submerged in hot oil or fat, where it cooks extremely quickly and gains a crispy, crunchy and very tasty exterior. Soaking things in boiling-hot fat can make anything delicious. A common practice is to take something already delicious, loaded with fat and sugar, and deep-fry it FOR EXTRA FLAVOR. When this trope is pushed to absurd levels, it is always Played for Laughs.

In Real Life, deep-frying is popular in America (particularly in the Deep South), Scotland, and parts of Asia. A possible reason for its success is because deep-frying is so much faster than other methods of cooking. Once the oil is hot enough, the food cooks in minutes. This is particularly good in hot climates (like the American South and the parts of Asia, like Guangdong Province in China, where it is widespread), because when it's hot outside and there's no air conditioning, you want to stay out of the hot kitchen as much as possible. And since the heat makes a seal in the outer layer of the food, the inside is not as greasy as one might expect (if it is, someone did something wrong), as opposed to pan frying.

Indeed, properly deep-fried food is actually steamed on the inside, as the high temperature causes the water present in most food to vaporize; the pressure generated from the steam combined with the fact that fat and water repel each other ensures that the fat only penetrates the outermost layer if you've done things right.note This is why, when one makes french fries/chips well, the outer layer is crispy while the inner parts seem more like a baked or boiled potato. Note, however, that batter and breading almost always will absorb the fat; if you do things properly, though, whatever it is you've battered or breaded still won't absorb the fat, which is why properly-made fried chicken isn't greasy on the inside. A dash of Hot Sauce or a squeeze of lemon is always appreciated.