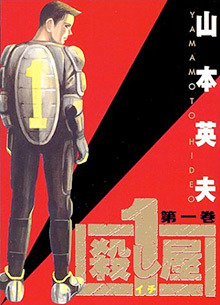 Ichi the Killer (Koroshiya 1) is a notably gory 10 volume manga by Hideo Yamamoto, based on the 1993 manga Ichi.

The story is set in the city of Shinjuku, specifically the red-light district Kabuki-cho, where Yakuza rule the streets. A band of hoodlums lead by an enigmatic old man referred to only as Jijii ("Old guy") hopes to challenge that by starting with Anjou, the leader of a powerful clan of Yakuza known collectively as the Anjougumi. The culprit, according to Jijii when he and his group arrive to clean up the mess, is the titular Ichi. The rest of his group are very off-put by the gore, wondering what kind of monster Ichi must be. They clean up the room and empty the safe which contained approximately 300,000,000 yen.

The next day, the members of the Anjougumi are distraught to find their leader missing. Notably, Masao Kakihara, a high-ranking member of the group and a noted extreme masochist (his several facial scars, the extensions of his mouth, and numerous piercings attest to this) dismisses all notions of Anjou having run off with the money or of him having been killed, vowing instead to find his captors and punish them severely.

Then we meet Ichi, 22 years old and an extremely meek Manchild, who is pushed around by almost everyone he meets. His only response to the torment is to apologize and smile nervously, which usually ends up just angering his bullies even more. However, with subtle manipulation and the use of Ichi's troubled past, Jijii is able to temporarily transform the unassuming boy into a monstrous killer, known for crying profusely during his murders.

The story unfolds with Kakihara ruthlessly tracking down Anjou's killers (which ends up hospitalizing a member of a fellow Yakuza gang, getting Kakihara ejected from the group) and later on, focusing mainly on Ichi himself. After encountering the hitman's handiwork time and time again, Kakihara comes to realize that Ichi might be capable of giving him the ultimate pain that he has so desired to find.

Tropes found in the manga: