Series / Come Dine With Me 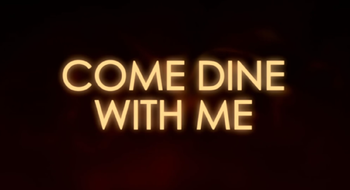 The concept is simple: Five (four in primetime) contestants take turns hosting a dinner party at their houses (you don't have to cook the food; but it's generally the done thing). The four/three other contestants mark it secretly on a scale of 1 of 10. The contestant with the highest score wins £1,000. note It is noticeable that the Irish version pays €1,000, which even after Brexit is still less than £1,000. (For now, anyway. June 2018.) Are Irish contestants being short-changed?

As with an omelette, great things can come out of a simple idea. You get arguments, bad food ideas and all the eccentricities of this world. Season with a fine dressing of snark from narrator Dave Lamb, and you have a superb meal for four.

There are multiple versions of the show: