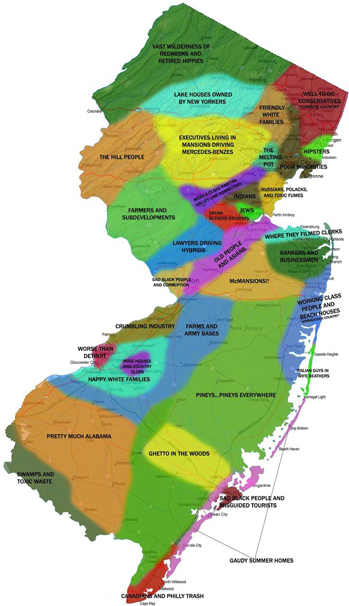 ◊
"Speaking the name of the State of New Jersey shall always get a big laugh. The Constitution cannot say exactly why."
— Dave Barry Hits Below the Beltway, The Constitution of the United States of America, Article IV, Section 5
Advertisement:

In the media, New Jersey is often portrayed one of three ways:

There is also an additional quasi-trope, which might involve any of these flavors or none of them, particularly prominent among media written by New Yorkers: the Shore as a setting, typically as a destination for white out-of-state tourists with money (and usually more of that than sense). A beach house may pop up.

Q: How is New Jersey like the Vatican?
A: Neither wants you pumping your own gas.

For information on the various regions, cities and locales of the state of New Jersey, as well as a long list of famous New Jerseyans, check out our handy Useful Notes page.

Not to be confused with that other Jersey, after which this one was named.