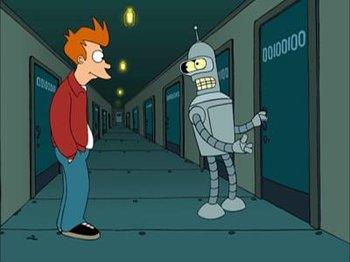 As Seen on TV

When everyone becomes sick of his disgusting habits around the Planet Express office, Fry moves in with Bender, whose closet sized apartment is too small for a 20-something slacker and his Robot Buddy. Fry and Bender find a new, roomy apartment, but when Bender's antenna begins wreaking havoc on the building's satellite TV, Fry must choose between his new home and his metallic pal.