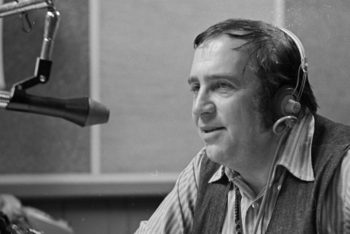 Shepherd specialized in irreverently humorous monologues about growing up in a middle class family in Hammond, Indiana during The Great Depression, along with accounts of his young adulthood, including his time in the U.S. Army Signal Corps during World War II, which mixed sophisticated reflections with broad comedy.

is an exhaustive collection of info about Shepherd and his extensive, extremely eclectic career.

Shepherd is noted as one of the writers of the film A Christmas Story, which is based on anecdotes primarily from his book In God We Trust, All Others Pay Cash. He also provided the voice of the nostalgic narrator in that film and had a brief cameo appearance in it.

He once played a prank in which he asked listeners of his late-night radio program to go to their local bookstore and request a nonexistent book by a nonexistent author: I, Libertine by Frederick R. Ewing, a social satire set in 18th century England about a rakish socialite named Lance Courtenay. The prank was so successful that the book ended up on the New York Times bestseller list (which was then compiled based on feedback from bookstores) despite not actually existing, and in the process exposed a large number of literary critics as frauds after they began writing phony reviews to cash in on the novel's supposed popularity. After the truth came out, publisher Ian Ballantine approached Shepherd about actually writing the novel, with noted science fiction writer Theodore Sturgeon being brought on as a co-author with Shepherd. As one might expect, the real I, Libertine then went on to become an actual bestseller thanks to the notoriety of the prank.

Not to be confused with Country Music singer Jean Shepard (who he called "The girl who sings through her nose" as opposed to his being "The guy who talks through his nose.")

open/close all folders
Radio
Starting as an amateur radio operator in his teens, Shepherd spent thousands of hours on the airwaves, with stints in Cincinnati, Philadelphia and finally New York, where he hosted a nightly show for several decades on WOR-AM, which with its 50,000-watt signal was heard throughout the Eastern U.S. He was also syndicated to other markets. While he started out as a typical DJ, he gradually devoted time to storytelling, until that became the focus of the show.
Literature
Starting with regular short story contributions to Playboy, he went on to publish several books.
Television
After a stint as a local TV host in the 1950s, he became a regular presence on PBS in the '70s and '80s, hosting the video essay series Shepherd's Pie and Jean Shepherd's America and presenting dramatized versions of his short stories on anthology series such as Visions and American Playhouse.
Film
A comparatively small part of Shepherd's career compared to his other work, but A Christmas Story, which he co-wrote and narrated, is far and away his best-known work.
Discography
Shepherd released several spoken word albums and tapes. Some of these were Recorded and Stand-Up Comedy, while others consisted of him reading his own works or his favorite poems.

"Keep your knees loose, and keep your tropes well-oiled!":