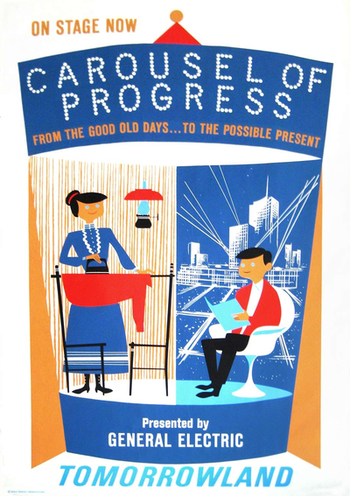 "There's a great big beautiful tomorrow, shining at the end of every day..."
—The opening line of the Carousel of Progress' theme song.
Advertisement:

Walt Disney’s Carousel of Progress is an attraction located at the Magic Kingdom in Walt Disney World and formerly at Disneyland. Starting life as an exhibition at the 1964 New York World’s Fair sponsored by General Electric, the Carousel of Progress is an audio-animatronic show built into a rotating theatre. Steeped in nostalgia and the excitement of future technologies, the Carousel revolves around an American family living through four different eras while experiencing the wonders of how Technology Marches On.

Generally considered one of Walt Disney’s finest and most beloved achievements, the Carousel has run for fifty years and is the longest-running show in the history of American theatre. The attraction’s original concept was set in the never realised Edison Square area in Disneyland and would show how G.E. appliances have benefitted American families. The actual attraction opened at the 1964 World’s Fair as Progressland, featuring Rex Allen as the voice of the host, the father of the family later named John, and a theme song written by Richard and Robert Sherman named “There’s A Great Big Beautiful Tomorrow”, which has become a popular song among Disney fans.

The attraction opened in Disneyland in 1967, lasting until 1973 where it was replaced by America Sings. The Magic Kingdom edition was sponsored by G.E. for ten years and went through numerous changes, particularly in the final modern setting to keep up with the times and changing technologies (the attraction is about progress after all). The Sherman Brothers were asked to write a new song to match G.E.’s desire for audiences to buy appliances now rather than in the future, the song being “The Best Time of Your Life”. After G.E.’s sponsorship ended, the Carousel underwent major refurbishments and became a tribute to the original attraction and Walt Disney’s vision, featuring a new cast headed by Jean Shepherd and a return of the original theme song.

As said, the attraction shifts through four different eras, featuring the same family of father John, his wife Sarah, their kids Patricia and Jimmy, the family dog Rover, Grandma and Grandpa, and "perennial house guest" Uncle Orville, as they experience the development of technology and electricity. The first act is in the turn-of-the-century on Valentine’s Day and features innovations of the era and nods to early films, Thomas Edison, and the Wright Brothers. The 1920s act takes place on Independence Day, featuring the new electrical marvels that cause a blackout. The third act is set in the 1940s on Halloween, introducing television and Sarah’s attempt to handle a makeshift paint mixer. The final act is set on Christmas in the modern era (around the 1990s) that features hi-def television, virtual reality games, and voice activated appliances. An early version had the last act set in Progress City, better known as Walt’s original concept of Epcot.

Carousel of Progress provides examples of: