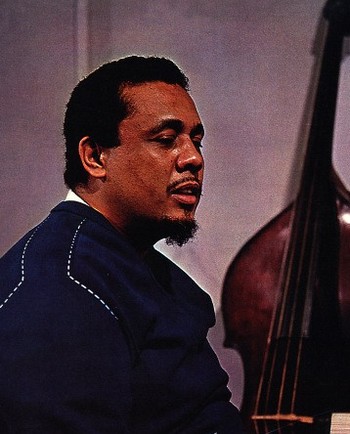 Anyone can make the simple complicated. Creativity is making the complicated simple.
Advertisement:

Charles Mingus, Jr (1922–1979) was a Jazz bassist, pianist and composer. Dubbed "The Angry Man of Jazz" for good reason, he was very hot-headed and outspoken about racism and civil rights, but also one of the most influential musicians and composers of jazz, covering the whole spectrum from 1940's big band music (he briefly played with, and was one of very few musicians to ever be fired by, Duke Ellington) through bebop up to free jazz and beyond, while still always keeping one foot grounded in blues and gospel traditions. Starting out as a classically trained cello player, and then discovering that there was no demand for a black cello player in The '40s, Mingus switched to bass and ended up becoming one of the most iconic bandleaders of the 1950's and 1960's alongside the likes of Miles Davis, John Coltrane and Charlie Parker, as well as one of the most ambitious composers. He's the first — and only, so far — jazz musician to have his entire (gigantic) catalog acquired by the Library of Congress.

Albums by Charles Mingus with their own page:

Better Git Tropes in Yo Soul: