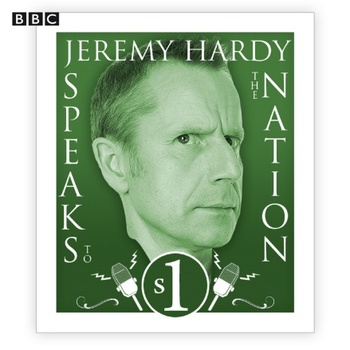 Jeremy Hardy Speaks to the Nation was a comedy radio series on BBC Radio 4 starring Jeremy Hardy (The News Quiz, I'm Sorry I Haven't a Clue).

In every episode, Jeremy would give a comic lecture on a topic of his choosing, interspersed with discussion and sketches featuring his two guests.

The series ran for ten seasons between 1993 and 2014, and was followed by a Spiritual Successor, Jeremy Hardy Feels It, which dispensed with the sketches and guests and just had him talking about an emotion, followed by an audience Q&A. Feels It ran for one season of four episodes. Any plans for a second season were sadly ended by his death in 2019.