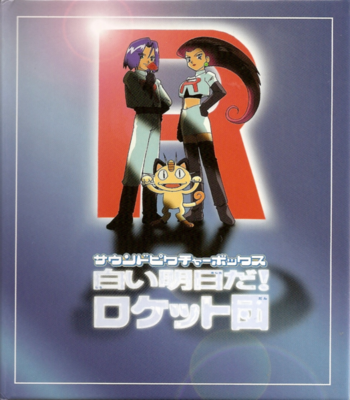 Cover of the CD release.
Advertisement:

The drama starts with Team Rocket having failed to capture Ash's Pikachu again. As they argue about whose fault their latest failure is, a Team Rocket member called "Mondo" appears. James tells his friends that Mondo is It turns out that he is a "Team Rocket Special Delivery Member Trainee" who provides other members with food and funding for their various activities.

Mondo is a huge fan of the trio. He gushes over them and is impressed by their stories. After both challenging and defeating Mondo in a battle, Jessie offers Meowth in exchange for Mondo's Ditto.

After Team Rocket leaves with their new partner, Mondo gives Meowth a massage and asks if he'll ever be as "great" as Jessie and James, to which Meowth tells him that he will because of his help, saying that Jessie and James were idiots who brought his abilities down. Elsewhere, Jessie and James plan on having Ditto turn into a Pikachu that they can give to Giovanni. Unfortunately, the Ditto has trouble listening to their commands. For example, it turns into a Hitodeman (Staryu) instead of Hitokage (Charmander),

A swarm of Beedrill attacks the gang while Ditto is too busy transforming into random Pokémon. James has Weezing send up a smoke signal, but Meowth refuses to go help because he doesn't want to bail the duo out anymore. Mondo goes to help without Meowth.

It's a White Tomorrow, Team Rocket! provides examples of: