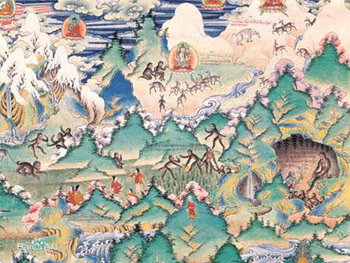 Tibetan mythology comprises the traditional and religious stories of Tibet, both pre-Buddhist and Buddhist. While the country may be part of China now, it still maintains it's own distinct culture and mythology from that of China, and elements from Tibetan mythology have managed to break through and become mainstream to the West. For more interesting info on the folklore and mythologies of the other East Asian cultures, see the pages on the Chinese, Koreans, Mongols and Japanese, and for the folklore and mythology of the other countries in the Himalayas, see Hindu Mythology.