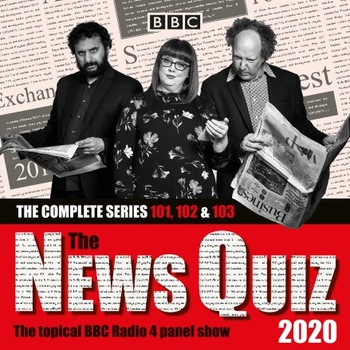 "We present The News Quiz, with your host Andy Zaltzman!"
—Opening announcement
Advertisement:

A Long-running (reaching its 100th series in 2019) BBC Radio 4 Panel Game, The News Quiz is a comedy programme in which "contestants" make fun of news stories over the last week. The show began broadcast in 1977 with Barry Norman as chairperson; it was later hosted by Barry Took, Simon Hoggart, Sandi Toksvignote who stepped down in June 2015 to found the Women's Equality Party, and Miles Jupp, and since 2021 has been hosted by Andy Zaltzman (following a period after Jupp's departure where the chairmanship was split between him, Nish Kumar and Angela Barnes). The panellists are predominantly stand-up comedians and political journalists. It is known for having actual BBC newsreaders who read out funny news stories in the show.

Usually broadcast every Friday in the late afternoon,note alternating every 6-8 weeks with The Now Show and occasionally Dead Ringers and has a set of pages on the BBC website

The American equivalent is Wait Wait... Don't Tell Me!.

"And with that, goodbye."