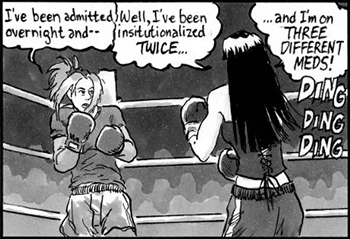 "Now if you haven't been through it yourself, you may not be aware that coming-out story is something of a competitive sport amongst gay people. It's like a Top Trumps of Who's Had the Worst Time. 'Oh, you got shot in the head? You win!'"
— Susan Calman, Susan Calman is Convicted
Advertisement:

Every now and then, life sucks. Sometimes getting out of bed in the morning can seem a feat of Herculean strength, and dragging yourself into school or work is all but impossible. Often, the one thing that can sustain us as we limp into the office/classroom after a relationship break up, family row or disastrous guinea pig incident is the reassurance that our friends will lend an ear to sympathize in our hour of need...

Er, we hope. As long as someone else isn't entitled to more angst than we.

In many stories — and often in real life too — there's only so much sympathy to go around. So if you arrive to your workplace bemoaning the frankly humiliating first meeting with your in-laws, or the parking ticket you got as a result of an over-talkative cashier and a downright malevolent traffic warden, better take a note of the gripes of your co-workers before you launch into that pent-up tirade. Chances are that if someone has an angst that "trumps" yours, your worries — no matter how valid — become instantly trivial. And the rest of the episode will probably be devoted to you "getting over" yourself in order to be there for your pal. Even you yourself will eventually give a monologue on the importance of not dwelling on your worries because there are people worse off than yourself, and you should count your blessings.

There is a certain validity to this way of thinking; it's usually better to be positive after all, and seeing the difficulties others are facing can be helpful in putting your own problems into perspective. However, human nature being what it is, we're allowed to feel sad or grumpy from time to time without being criminalized for it. Occasionally, a show or book will acknowledge this and subvert this trope, revealing that the character who was being told off for being such a drama queen by friends with "bigger issues" is actually in pretty serious trouble.

On the other extreme, this can be used for comedy... such as, for example, a character loudly complaining about their bad manicure as if it's the worst thing that has ever happened to anyone ever while someone else in the background is being chased by enraged rhinos. In such cases, it's clear that the viewer is supposed to see their worries as trivial, and usually we will — unless Fridge Logic kicks in.

Sometimes this is a pretty logical trope — a parking ticket isn't nice, but a bereavement is on a totally different level of grief altogether. At other times, though, the viewer might note that the character with the "lesser" gripe has every right to be downhearted — for example, a character whose illness is serious, but not as serious as someone else's — and may accuse the supporting cast of having No Sympathy when they fail to acknowledge this. Falsely setting up problems in competition seems to imply that only the biggest problem can be dealt with, whatever the feasibility issues or nature of the lesser one. At its worst, a character who consistently has severe problems but is always one-upped by different people who once or a few times have a worse problem, leaving their problems totally ignored, could suddenly explode in rage over time from being subjected to this far too often. Even an Iron Butt Monkey has their limits. And, of course, even a minor problem can be made easier to cope with or slightly more tolerable if you know that the people around you have some sympathy; the character who got the parking ticket might not be demanding that everyone drop what they're doing and focus on them to the exclusion of the character dying from cancer (although they might be, of course), they might just be looking for a few kind words, which doesn't seem entirely unreasonable.

May show up on internet debates, especially as Flame War fuel. If this happens on your message board, it might be a good idea not to post until it's all over — your will to live will be drained one way or another, either in sympathy or in despair at so much angsting. If it gets out of hand, you may need to lock the thread.

Also sometimes known as Misery Dicks (i.e., my misery dick is bigger than yours) and Woe-Offs — as well as Oppression Olympics, when it occurs in debates concerning social justice issues.

Compare When I Was Your Age..., First World Problems, and Angst Dissonance. Contrast If You Thought That Was Bad.... See also Appeal to Worse Problems. Sister Trope to Outhumbling Each Other.

I Think I Got You Beat

In "Shrek the Musical," Shrek and Fiona both think they have one-up on each other when it comes to having had a horrible, awful life, culminating with Shrek telling Fiona that his parents sent away on his birthday, only for her to reply that she was sent away on Christmas Eve.

I Think I Got You Beat

In "Shrek the Musical," Shrek and Fiona both think they have one-up on each other when it comes to having had a horrible, awful life, culminating with Shrek telling Fiona that his parents sent away on his birthday, only for her to reply that she was sent away on Christmas Eve.