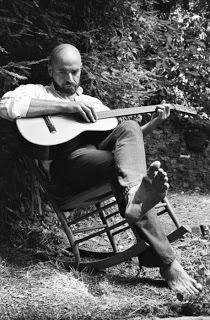 Sheldon Allan "Shel" Silverstein (September 25, 1932 – May 10, 1999) was best known as an author of offbeat children's poetry. He also wrote picture books, songs, song lyrics (most famously "A Boy Named Sue", "The Unicorn" and "The Cover of Rolling Stone"), one-act plays and films.

Fans of his mainstream work may be rather stunned to hear that many of his songs are very adult in tone, and that he personally was a real-life Chick Magnet who lived for several years in the actual Playboy Mansion. He died from a heart attack in May 1999 and was buried in a Chicago cemetery.

Tropes appearing in his work: