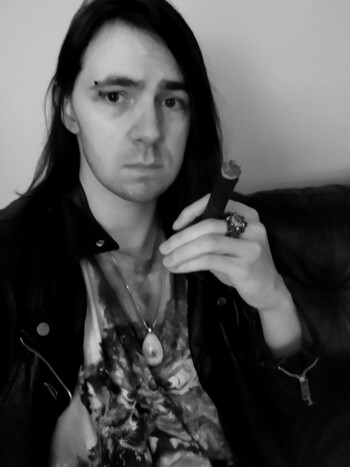 Looks Cheery, doesn't he?
"Night takes back our nightmares, our dreams fill the skies
With all of our pictures and stories and signs
Though trapped we may be in our heads and our hearts
Our dreams and ideas are all that we are."
— The Star Pixie and the Serpent Queen
Advertisement:

Kent John Starrett is an American author and illustrator of primarily young adult and juvenile fiction. He is known for his high-contrast neon art style, sardonic prose, bizarre and uncanny creatures, and a general sense of quirkiness that balances cutesy, cartoonish art/prose with creepy atmosphere and deeper themes. He has high-functioning autism and PTSD, which heavily influences his peculiar perspective and unconventional body of work. His works include Jackie and Craig and The Star Pixie and the Serpent Queen. He maintains an active web presence, and you can find him on Twitter, Tumblr and Youtube as Thoughtful Devil.

Tropes featured in Kent Starrett's body of work include: