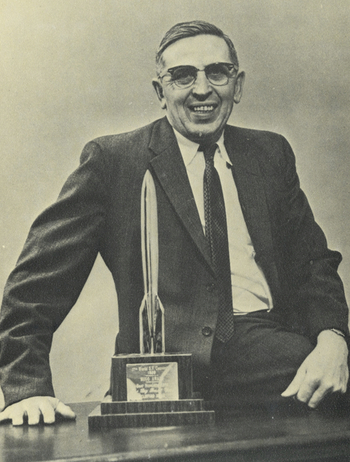 Clifford Donald Simak (August 3, 1904 – April 25, 1988) was a well-known Science Fiction writer. His most famous novels are City, The Goblin Reservation and Way Station; his short story "Huddling Place" appeared in The Science Fiction Hall of Fame, Volume 1, and The Outer Limits (1963) adapted his story "Goodnight, Mr. James" as "The Duplicate Man".

His works tend to be soft science fictions, as he's concentrating on characters and story, not on tech. He tended to be more idealistic than cynical.

What can be said in addition? Let's just say that Isaac Asimov was his Promoted Fanboy.

The author's works provide examples of: