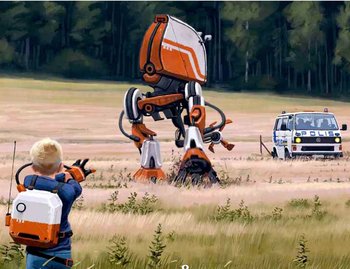 Science fiction set in the countryside and encompassing themes appropriate to that setting. While this is very common in fantasy, it's a much rarer thing in science fiction. Stories set in Arcadia or Ghibli Hills are likely to fall under this category. However, the trope refers not merely to an idyllic setting — many sci-fi stories start in such a place, but often see it destroyed or heavily altered early in the narrative or leave it behind in the first act and not return to it for 400 pages. Pastoral sci-fi refers to a work whose overall tone reflects the atmosphere of such a place — calm, peaceful, and meditative. Drama and excitement may certainly happen here, but the overarching feel of the work remains one of tranquility.

The setting may be the result of a Cozy Catastrophe (or even a true and terrible apocalypse, provided that it was a long time ago and things have settled down in its aftermath). On the other hand, perhaps nothing of the sort happened, and this is a scientifically and culturally advanced, but none the less green, open, and idyllic world, filled with Crystal Spires and Togas and Sufficiently Advanced Bamboo Technology. Or it may be our world, where an alien or time traveler has dropped out of the sky into a rural setting without necessarily destroying the place.

The Noble Savage and Space Amish are likely to inhabit such a story, or conversely, perhaps a Crystal Spires and Togas crowd trying to live a Solar Punk lifestyle. Slice of Life science fiction lends itself well to this genre.

The Trope Namer is Clifford Simak, who used this term to describe much of his work, particularly Way Station.

To reiterate, this is a science fiction trope. Both fantasies and realistic fiction employ this sort of vibe too commonly for it to be particularly notable, but in science fiction it is rare enough to stand out.