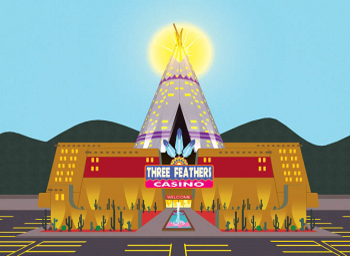 "Wamapoke Casino: Slowly taking our money back from white people, one quarter at a time."
— Ken Hotate, Parks and Recreation
Advertisement:

Wherever there's an Indian reservation in Movieland, there has to be a casino.

This is partly Truth in Television. In the United States, a series of legal decisions that began with Bryan v. Itasca County in 1976 and ended with the creation of the National Indian Gaming Commission in 1988 established that Native American tribal reservations who set up a "tribal-state compact" with their state are exempt from any state gambling bans or regulation (though they are still subject to federal regulation).

Since reservations are typically among the poorest and least developed parts of the nation, the upside is that giving them a monopoly on gaming is a way to attract tourists and jump-start reservation economies. The downside is that impoverished residents can be attracted to addictive gambling, and there is no guarantee that the casinos will enrich anyone but the tribal councils. Lately, the governments of smaller tribes have been disenrolling members

so that casino profits are spread among fewer people.