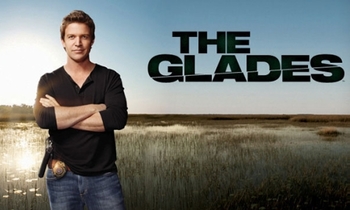 The Glades is a cop drama which features McLeod's Daughters star Matt Passmore as abrasive Cowboy Cop Jim Longworth, who has been relocated to Miami from Chicago and shot in the butt by his boss, who thought he was sleeping with his wife. Jim applies his keen insight and massive ego to the crimes that are committed - guess where - in The Glades.

The show was cancelled

on August 30, 2013, even though the season four finale had an audience of 3.4 million total viewers, which was a season high, and an all-time high for a Glades season finale. Fans were... upset, especially since the show ended on a Cliffhanger.