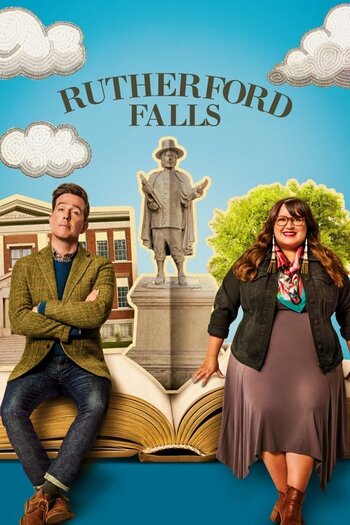 "I'm the one connecting all those dots. I'm the one telling the whole story. I am the steward of my family's legacy that will resonate throughout history. That's not nothing, jerks."
— Nate Rutherford
Advertisement:

Rutherford Falls is a Peacock original series created by Ed Helms, Michael Schur, and Sierra Teller Ornelas. The show is notable for featuring a cast that is half made up of Native American actors and having a majority-Native writer's room.

Nate Rutherford (Helms) is a proud resident of Rutherford Falls — a town founded by his family in the 17th Century — and dedicated to promoting his home and his family's association with it. However, the statue of town founder Laurence "Big Larry" Rutherford causes one too many traffic accidents and leads to the the townspeople wanting to move it to a less prominent location, Nate engages in an angry rant that piques the interest of Terry Thomas (Michael Greyeyes) of the Minishonka Nation who sees an opening to try and reclaim land that originally belonged to his people.

Simultaneously, Nate's childhood friend Reagan Wells (Jana Schmieding) struggles to find support for a proper Minishonkan Cultural Center, and finds herself torn between helping Nate and supporting Terry's efforts while integrating herself back into Minishonkan society after having been ostracized for many years.

A second season released on 16 June 2022, but the show was then cancelled by Peacock.