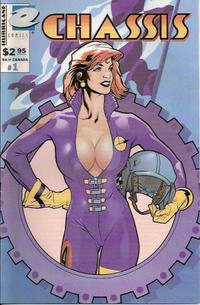 She's hot and gets the job done!
Advertisement:

Chassis is a comic book series set in a time when science advanced at an amazing pace. New technology meshed with the past bringing with it zoot-suit robots, jet pack gang-bangers, art deco skylines, and rocket car racing!

Rocket car racing, also known as the Aero-run is the world's most popular sport. It's a high stakes spectacle of speed and peril where flying rocket cars race at breakneck speeds around hairpin turns and gut wrenching drops. Its drivers are legendary, but the money and power behind the sport is deeply corrupt. Chassis, the 17-year-old daughter of Charles Foster McBain, one of the Aero-run founders, desperately wants to be a rocket racer but her father won't allow it. Partly due to the dangers of the sport, but mostly because of the nefarious gangsters and corporate thugs who control it. So the brash young girl, with the help of her robotic mechanic and best friend, SLIC, devises a plan to enter the race under an alias in hopes to prove to her father she's up to the challenge. But Chassis' daring decision only leads to more danger for her, her friends, and her father!