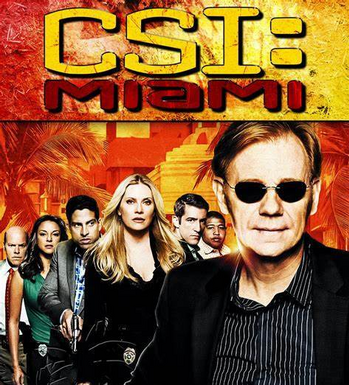 In a World… full of nasty crimes, only one man can ensure that the women of Miami continue to be able to wear bikinis and sunbathe without corpses washing ashore. That man...
Advertisement:

Welcome to the CSI Spin-Off set in Miami. Horatio Caine (played by David Caruso) takes the role of the guy spouting the Quip to Black, which he often does

after putting his sunglasses on

by, of all people Phineas and Ferb. Horatio differs from Gil Grissom by being a complete and utterly unrepentant dick, unless you're under 15 and/or a woman and/or have just survived a horrible crime — in which case, he's your best and most compassionate friend (and your best line of defense if the bad guy comes back to get you).

The show uses its Miami setting to tell different stories from its Vegas counterpart; due to its coastal setting, the show features more water-based mysteries (e.g., stories involving dead people on boats and people fleeing Cuba), as well as dropping the 'pure science' angle of its parent series for a more direct 'police procedural' concept (meaning that Horatio Caine is primarily a police officer, rather than a scientist). One of its oddities is Alexx, The Coroner, who likes to say, "Oh, poor baby" or words to that effect over the corpse of the week (it's established early in the series that she does it to give the deceased a sense of 'reassurance'). Other characters include Calleigh Duquesne, known as the "bullet girl"; Ryan Wolfe (always referred to by Horatio as "Mr. Wolfe"); and Eric Delko, whose intensely drippy sister was briefly married to Mr. Caine before getting introduced to the business end of a firearm.

Probably what would result if the writers of Starsky & Hutch were told 'Stop that! This is serious, dammit!'.

The actors have mentioned that they believe the show to be a comic-book world that happens to be filmed in live-action, which... explains an awful lot, actually.

Strictly speaking this is an ensemble show, like the other CSIs, but one character dominates the show. The show also tends to have a far more, for lack of a better term, surreal, tone than its predecessor.

Probably used the most on this show.

Example of:
Quip to Black

Probably used the most on this show.