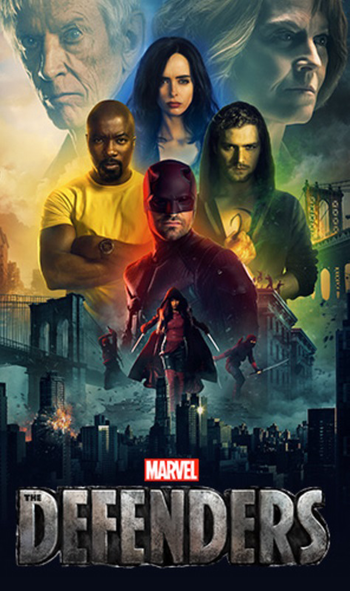 DEFEND. note Center-clockwise: Jessica Jones, Danny Rand, Matt Murdock, and Luke Cage. Top left: Stick. Top right: Alexandra. Bottom center: Elektra, and The Hand. Not shown: piles of personal issues.
"You four - the Devil of Hell’s Kitchen, the smartass detective, the righteous ex-con, and the kid with the glowing fist - the war for New York is here... So get your shit together."
— Stick
Advertisement:

The Defenders is a superhero miniseries, based (very loosely) on the Marvel Comics team of the same name. The series originally premiered on Netflix in 2017.

Like many other shows produced by Marvel Television, The Defenders is set in the Marvel Cinematic Universe, and is a crossover between their previous four Netflix dramas: Daredevil, Jessica Jones, Luke Cage, and Iron Fist, representing the closure of "Phase One" for the Netflix series much like how The Avengers was for the films. Its showrunners are Douglas Petrie, Marco Ramirez, and Drew Goddard, all of whom previously worked on Daredevil.

If you couldn't already tell, this show features a large cast. There's the four heroes, practically every supporting cast member from each of the four shows, plus new characters.

The Defenders premiered on August 18th, 2017, and features a total of eight episodes. A second season hasn't been confirmed, but with the cancellation of all the Marvel Netflix shows by February 2019, it seems highly unlikely. In February 2022, the series, alongside the surrounding sub-franchise, exited Netflix's platform, moving to Disney+ the next month.

The Defenders contains examples of:

open/close all folders
A-F
G-R
S-Z
Trish Walker: What can I say? Another day in New York. But at least the rent is cheap.
Come as you are,
as you were, as I want you to be.
As a friend, as a friend.
As a known enemy.
Feedback