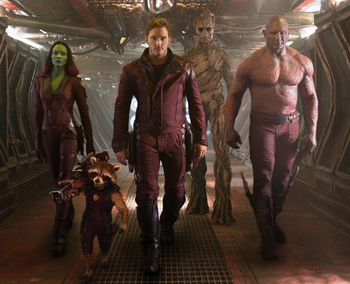 This is a team of disparate heroes trying to make the galaxy a better place. Light on the heroes, heavy on the trying.
"You think the four of you can save New York? You can't even save yourselves."
— Stick, questioning the importance of The Defendersnote Daredevil, Jessica Jones, Luke Cage: Hero for Hire, and Immortal Iron Fist

There are Ideal Heroes, redeemed villains and other card-carrying heroes, but due to the nature of the Marvel Cinematic Universe, it shouldn’t be a surprise that a lot of these good guys stand out as the ones who have many character flaws and darker aspects in their personality.